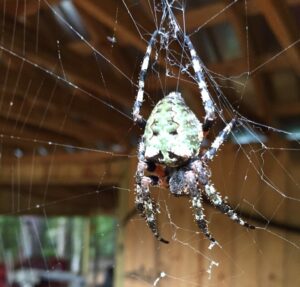 Here we are in Georgia enduring the ridiculously hot month of August, and the spider calls at Canton Termite and Pest Control are coming in daily. There’s just something about these creepy, crawly, eight-legged arachnids that creates a sense of panic in the majority of people.

Georgia has about ten common spiders, but for now, we will discuss a spider known as the orb weaver. This variety of spiders often frightens homeowners because they can be similar in coloration and size to the venomous brown recluse. I say ‘can be because the orb weaver can actually vary in their coloration and their size. The orb weaver is typically an inch to an inch and a half with an abdomen about the size of a large marble. They’re known for the beautiful patterns across the abdomen and cephalothorax regions. Their colors and designs vary. Orb weavers can be orange, red, brown, and black. You do see the occasional yellow or green spider as well. They’re quite beautiful if they’re not stuck to your forehead or crawling frantically through your hair!

What is very distinct about this spider is their web creations. Their webs are called sheet webs and actually have an escape tunnel in the back area of the webbing! Smart spiders. Their webs are orb-shaped or circular and can be up to 3 feet in diameter.

These are the spiders you will often see on your back porch. Unfortunately, they tend to build their homes over your doorways in order to take advantage of the nighttime lights coming from your home. Why you might ask? Because insects are attracted to the light and so…supper calls. It can be disconcerting to walk out early in the morning only to get a face full of webs and perhaps a very traumatized spider crawling around on your person as well. 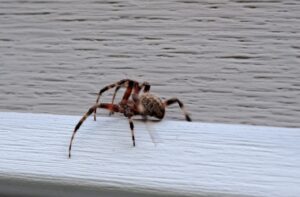 While they are present all spring and summer, they do tend to grow to an unusually large size for a Georgia spider during the months of August and September. Like other closely related spiders like the Joro and Yellow and Black Garden Spider, the orb weaver webs can be quite beautiful and ornate. I always imagine Charlotte’s Web!

The orb weavers are not known to be harmful or aggressive to humans or pets, but having a large spider stuck to your forehead first thing in the morning can definitely make you hurt yourself.

So what can be done?

Ongoing pest control can certainly help reduce the number of spiders around your home; however, the tremendous population makes complete elimination impossible.

As a homeowner, there are ways you can help solve the spider dilemma. By reducing the food source, you can reduce the spiders. Do this by covering interior light sources with curtains and keeping porch lights off when not in use. Repeatedly sweeping down their webs will encourage the spider to move along and build elsewhere. A variety of insecticidal sprays can be used, but since spiders tend to drop down out of trees at night, it can be a losing battle to be completely spider-free. And we must remember that spiders serve a purpose and have value. All spiders are considered beneficial since they help control the insect population. They feed on flying insects such as mosquitoes and have even been known to catch the occasional cockroach.

If pests are bugging you, give us a call at 770-479-1598. Canton Termite is your small town pest control company and is happy to help!