Bats in the Attic

In the heat of summer, you may not be thinking about hibernation and wintertime, but the bats of Canton are in the preparation stages even now. So what’s the big deal?

The problem for homeowners comes in when bats find your attic to be a hospitable winter hideaway. No one wants uninvited guests for the season. But don’t worry, there are steps you can take to prevent a hostile takeover of the winged variety. 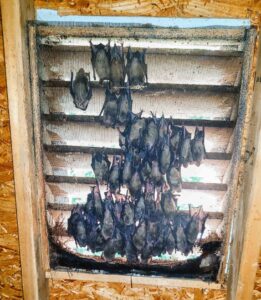 First of all, understand that bat removal and prevention has to carefully follow a seasonal plan to ensure the safety of the bats. While the babies and juvenile bats are in need of a mother’s care, they are unable to leave the roosting area and could be at risk of being sealed into your home. But there is a window of opportunity for homeowners and Canton Termite to ensure the safe removal of resident bats. After mid-August, the babies are able to care for themselves and leave the attic space so it is safe to remove the bats and also seal any openings in the home. Right now, between the maturing of the juvenile bats and the cooler weather inviting hibernation is the time to remove or prevent bats in residential areas.

There are six species of identified bats generally found in Georgia, and our office receives many calls about their removal from homes each year. The bats like dark, quiet spaces such as attics and hollow walls to call home. Bat guano (poop) can be a fairly nauseating smell and not a popular air freshener for the holidays.

Another reason homeowners will want to rid their homes of bats is that they can carry parasites and bat bugs. Yuck! Even the clean-up of bat guano can cause possible health issues, so a professional is a much better option for the homeowner. Also a side note, many people think they have bedbugs when in fact they have bat bugs. I personally did not know there was such a thing. It’s a thing.

Now that we all have the shivers, let’s talk about avoiding the problem of a bat infestation. Always, always, the first line of defense is prevention. If the bats can’t get in, they can’t live in your home. So first things first. Look for openings such as cracks, torn screens, and areas around louvers where bats can squeeze into the space. Loose siding and shutters can also be an area at risk. An important note is that some bats can fit themselves through a crack the size of a quarter…so yeah. If you already suspect you have bats, look around for dirty edges around holes to see where they have been squeezing into your home. Look for bat droppings. They look kind of like mouse droppings but they are shiny and have pointy ends. Another distinction between bat droppings and mouse droppings is that bat droppings stick to surfaces. I know, more than you wanted to know, but you need to know.

Sometimes people believe things like fans and lights will make bats leave, but unfortunately, there is no scientific evidence to support the theory. What has commonly considered a possible help is a naphthalene, which is used in mothballs. But before you put out a bunch of mothballs, here is a big word of caution…mothballs don’t smell so great either. Definitely don’t go throwing them willy-nilly into your house, making it difficult to pick them up when you find you can’t take the odor! You might try placing the mothballs into stockings so that they can be easily removed. Still, there’s a smell associated with the mothballs, so use with caution. And here I’ll just say it, call a professional.

At Canton Termite, we know when it is safe to remove the bats and do a thorough job of inspecting the situation before beginning a removal plan. We carefully relocate the bats to a safer, wilderness area because bats are extremely valuable to our ecosystem. You just don’t want them in your home. A one-way device is commonly used where we know the bats are entering the space. This allows the bats to leave but not return. Late summer to early fall is the best time to remove the bats. After the removal, our expert technicians use their experience and unique education to find and seal any openings where the bats might try to get back inside.

Give us a call at 770-479-1598 to help you with your pest control and bat problems. Our hometown, family-owned company is ready!