Scorpions: The Cool and the Scary 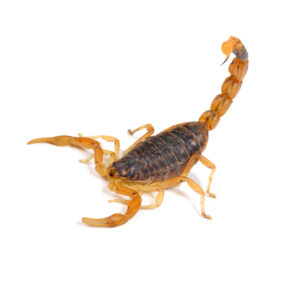 Perhaps it’s the pincer-like claws on the front of the creature, or maybe it’s the fear of a painful sting from the terrifying tail, whatever the reason…scorpions rank right up at the top of most dreaded creatures to find in my home.

And quite honestly, I feel like my fear is perfectly justifiable. I mean, some scorpion species can swing that terrible tail around and hit a target at 50 inches per second! Then there is the venom aspect: of the 1,500 species (that we know of), 25 of them are actually thought to be able to kill a human with their venom. The percentage is only 2% of the world’s scorpions, and the most dangerous species known are found in the Middle East and North Africa, but still…scary stuff for those who are afraid of the small but mighty creatures. If you’re curious, the really scary ones I found in my research were the Indian red scorpion and the deathstalker, gotta love that name right?

The venom itself is, despite my fear, interesting to learn about. One scorpion can make venom composed of twelve or more types of toxins, such as neurotoxin, hemolytic toxin, and cardiotoxin. They have this cool diversability because one toxin may work better on a particular prey versus another. Venom is obviously used for catching prey but also for self-preservation. Remember, the scorpion definitely has its share of enemies, ranging from birds and lizards to centipedes and even mammals of different kinds. Okay, so my last personal fear factor item is that momma scorpions carry their babies around on their backs. So not only is it possible that I might find a scorpion in my basement, but that scorpion could actually be many, many scorpions because itty bitty baby scorpions are hanging with momma. Creepy factor for sure! And by the way, mother scorpions give birth to live young and are also fiercely protective of said young.

Moving on. Now that I’ve shared the things that make me afraid of scorpions, let’s talk about the cool stuff! And yes, they are supremely cool creatures. First, even the scary stuff we mentioned is amazing. They give birth to live young. That’s really neat. Scorpions aren’t insects at all but are arachnids (like spiders). And I fiercely protect my own kids, so I gotta respect that trait in the scorpion mom.

Then there is venom production. Being able to produce dozens of different toxins? Wow! But that’s not all they produce. Scorpions make other chemicals such as serotonin, tryptophan, and histamine.

The venom itself has been found to have actual medical applications for humans. The proteins in certain types of scorpions (don’t go trying to get scorpion venom from the locals), have been used to treat autoimmune disorders like multiple sclerosis and inflammatory bowel disease. Not only that but there is research into using venom to treat brain tumors because chlorotoxin from the deathstalker, remember we talked about the various varieties, seems able to block cancer cell signals. From antimicrobial properties to protection against malaria parasites, scorpion venom could be a pathway leading to remarkable new medical innovations. The difficulty with this amazing find is the financial aspect. Scorpion venom is said to be the most expensive liquid in the world, coming in at an estimated $39 million dollars a gallon to curate and produce.

If all that isn’t enough for you, let’s discuss the fact that scorpions fluoresce in the presence of ultraviolet light!

The reason they do this is because their hyaline layer, part of the exoskeleton, has a chemical presence that is fluorescent. This layer is extremely durable and glowing fossils have been found that date way back. The theory on why they do this ranges from helping them find one another to increasing their hunting ability. For me, it’s so I can see, and avoid, them in the darkness of a campsite and walk to the bathroom.

There are other cool facts about scorpions such as their mating dance and the freakishly slow metabolism that makes it possible to go 6 to 12 months without eating, but in my opinion, none are as cool as the medical possibilities and the glow factor.

And now for the practical information.

Georgia scorpions are typically 2 ½ inches or more in length as adults and are gray, brown, or even black in coloration. They eat spiders, centipedes, and insects, and have even been known to go after small reptiles. The vision in a scorpion is poor so they tend to hide and wait for prey to move into their vicinity.

Common places to find scorpions would be under rocks and piles of wood, in piles of leaves or mulch, inside rock or brick walls, and inside your crawl spaces.

Georgia scorpions are not known to be particularly aggressive, and most people compare a scorpion sting to the pain from a bee sting that lasts up to 20 minutes. Of course, those with allergic reactions and sensitivities need to be extremely cautious and consult their physician with any concerns. Strangely, the time of year you are stung makes a difference in the level of severity, this is because springtime means a larger amount of venom is available for use.

Finally, the control of scorpions in the home is of great concern to most homeowners. Regular pest control services help to maintain an overall reduced insect population, therefore giving the scorpion less food source incentive. As always with pests, making sure your home is properly sealed and maintained is a necessary step to keeping the bugs, arachnids, and wildlife outside where they belong. Look for cracks and improperly sealed areas. This is another instance where a trained professional can find the most common areas of entries. Another caution is to make sure old wood and wood products, rock and leaf piles, and any other debris is kept away from your home’s perimeter.

As with all your pest control and wildlife needs, give us a call at Canton Termite and Pest Control so that you can live pest free!

Have an awesome day!

Scorpions: The Cool and the Scary
Tagged on: scorpians    scorpions    sting