I can’t tell you that I was excited to hear we have another spider to add to the Georgia resident’s list…in fact, it makes me shiver just a bit. I mean, have you seen these guys?

They are 3 inches across when those 8 creepy, crawly legs are extended. They are yellow and black striped on their backs and have a bright red design on their underside. Maybe it’s a childhood thing, but the color red brings several word associations…red means dead…red means stop…red means dangerous. 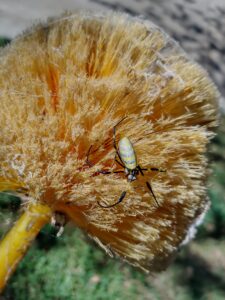 However, my assumption would be incorrect in this case. The Joro spider is not considered dangerous. Sigh of relief. Still, I just don’t like spiders. I don’t like their many scampering legs, and the thought of those legs crawling on me…yikes. I don’t like walking into their webs. I have fear. But the best way to combat fear is with knowledge. So here we go!

As stated earlier, the joro is pretty easy to spot since they are brightly colored and large. Their webs are huge, usually higher off the ground, are three-dimensioned, and have a golden color. Okay, I’ll admit it. They are kind of cool-looking. From a distance.

Their colors do look similar to the banana spider or the yellow garden or writing spider. The red underside and the golden-colored web are very distinctive features of this Georgia newcomer.

The first confirmed Joro was spotted in Hoschton, Georgia, back in 2013. It is likely they immigrated over stateside in a shipping container from Japan or China. And they don’t seem to be too picky about where they set up housekeeping. These spiders are being spotted in wooded areas as well as urban areas. Homeowners have been noticing them all around their homes. Entomologists believe they have successfully acclimated to the South with documented sightings from Blairsville, Georgia, to Greenville, South Carolina.

The biggest question scientists have been asking is whether this new player on the scene is going to cause problems with our local ecosystem. Could other orb-weaving spiders be outpaced or insect populations be demolished to a dangerous low? While there is much to still be learned, so far the news is tentatively positive.

The Joro is adapting well to living with the other local orb-weaving spiders. Their webs have been found close, and even attached to, other spiders without any obvious impact on either spider. An interesting note is that the Joro seems to be able to prey on the adult brown marmorated stink bug. If you read the last article, you will know that this stink bug is considered invasive and does much damage to crops. Other spiders have not been successful at capturing the marmorated. That’s a positive on the Joro’s side. Though they do seem to be vulnerable to wasps, birds, and mud daubers, so there is a natural check and balance on the overgrowth of the population.

Even though these spiders are somewhat frightening in appearance, the current evidence has shown no danger to people. All spiders do have venom; they use it to capture prey and survive. And all creatures, including spiders, will likely bite or sting you if you give them no other choice of escape. It’s simple survival. But these spiders are going to try to get away, they are not aggressive. They just want to be left alone.

There you have it, the Joro spider in a nutshell. They aren’t likely to be going anywhere so you might as well get used to seeing them around. But that’s okay. Because now you know, you have nothing to fear from the Joro, except maybe hurting yourself trying to get away. That is a definite possibility for this arachnophobe, even knowing the facts.

Happy fall from your friends at Canton Termite and Pest Control