My articles typically focus on a specific bug and give you, my readers, a bit of insight into the world of entomology. However, for the Christmas season, I want to focus on a “bug” of another nature.

Most people are familiar with the popularized definition of ‘humbug’ as being an insincere, curmudgeonly individual. And ‘Bah humbug’ is certainly a phrase most folks know well. Ah, Scrooge, you’ve made quite the impression. After all, no one wants to be a humbug!

But now… allow me to blow your mind. 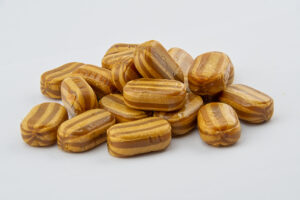 There is more to a humbug than a grumpy old man struggling to give up his miserly ways. Money, after all, shouldn’t be our primary focus…but then there’s food. Food is definitely a fabulous focus of the holiday season. Maybe you are more in the know than me and have some knowledge of British culture or perhaps you are a devoted Harry Potter fan (more on that later). But until today I had no idea that this word, humbug, actually has another definition. And here goes, a hard candy typically flavored with peppermint.

Mind blown? Mine was. I was researching the subject (why I’m not sure) and learned fascinating facts. Let me share!

First of all, where did the humbug candy come from anyway? It isn’t completely clear, but most sources say that the humbug originated in Northern England. The humbug was traditionally a toffee with a mint flavor. As far as when records of the lowly humbug are mentioned in books dating from the 1820s.

But wait! There’s more. If you are a loyal Harry Potter fan, you might have heard these humble confections mentioned before. I’ve watched the movies and read the books, but honestly never noticed the mention of the word ‘humbug’. Hagrid had humbugs in his coat pocket, along with keys, slug pellets, and strange-looking coins. So there you go. Humbugs are apparently delicious and famous.

And now for the ‘what’? What exactly is a humbug candy? It is a hard candy made by boiling sugar-based syrups to a high temperature. You might be more familiar with other types of hard candy such as candy canes and lollipops. Personally, I have made, after much trial and error,  hard candy before and can attest to the complexity of the process. It’s not easy.

Anyway, let’s go back to the basic preparation steps. After the liquid reaches a high temperature of around 293 degrees Fahrenheit, flavoring and color is added. Commonly used is peppermint flavor, and the coloration is traditionally black and white stripes. After the boiling phase, the mix is poured out and stretched, and folded. I think of taffy when I read this, but I’m not sure I’m accurate in my thought process. The finishing process is to roll it out into a long, thin roll and slice it into bite-sized pieces. Old fashioned humbugs were shaped like pyramids with rounded edges.

Personally, I have made hard candy before and can attest to the complexity of the process. It’s not easy. But we never grow without trying new things, hard things. Perhaps it is time to give humbugs ago in the kitchen. Should you find yourself feeling particularly ambitious, look up the recipe online and give it a try for yourself.