Eastern subterranean termites are a common and widely distributed termite in Georgia. It is a problem for homeowners from all over Cherokee County and throughout the Eastern United States as far west as Montana. This native species feeds on materials as structural wood, wood fixtures, paper, books, and cotton. Termites will even attack the roots of shrubs and trees. 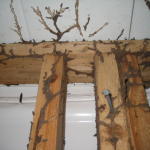 There will often be more than one colony working in a single building.

Signs of Eastern subterranean termites include dirt-colored  tubes built to serve as protected paths from the earth to the wood the termites are feeding on, and the translucent wings shed by the kings and queens during swarming. Swarming usually occurs in the spring, but other, smaller swarms can occur throughout  the summer and fall.

I hope to hear from you soon!