If you want to see a complex and extremely systematic society in action, then look no further than the humble termite. Termite colonies have been known to develop and spread because of emergence, which is a process where large numbers of less complex elements form an infinitely more complex whole. 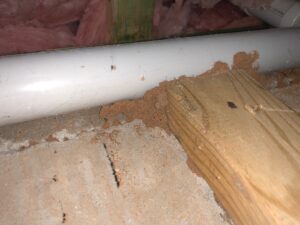 The queen is the center of the colony and breeds new termites who fulfill varying roles in the nest family. Termites use chemical messengers as a system to reveal their individual roles to one another and allow the work of maintaining balance to be fulfilled.

There are three main categories of termites: the soldier, the worker, and the swarmer. Each of these groupings possesses behavioral patterns distinct to their nature, and it is vital that homeowners know the function each provides to the colony as a whole. Understanding the functions of the colony is an invaluable tool to preventing or treating active termite infestations in and around the home.

The most number caste of termites is the worker caste. When you notice the insects feeding on wood or cellulosic material around your home, you are looking at the worker termite. This termite is smaller than the soldiers and typically lighter in coloration. 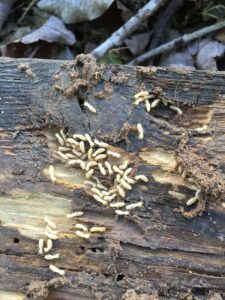 Providing food for the colony is one of the jobs of the worker termite, but they also care for the queen and young offspring. These workers are numerous in terms of percentage of the colony but typically remain in the tunnels beneath the ground or directly at a feeding site for a limited time. Attacks on homes and buildings usually happen from beneath or within the walls, so it is only when an active feeding sight is visible that they are seen.

Soldiers are known as the defenders of the colony, not surprising given their descriptive name. The termite colonies tend to be widespread and not contained in a small area. This spreading makes the workers, the young, and the queen at risk for an attack from other pests. Thus, the job of the soldier termites is to protect the colony, especially the queen.

Any outside invaders will come into conflict with the termite soldiers. These termites also assist in repairing damage to the nest from something like a collapsed wall. Much larger than the workers, the soldiers can be identified by looking for the large heads and mandibles. The mandibular parts are used to attack and defend against invading insects, but humans are not in any danger from the soldiers’ mandibles.

Soldier termites are not able to eat cellulose materials so they are not a direct threat to your home. But the important warning is this: termite soldiers’ presence is a sign that workers are nearby. Workers nearby mean the damage is actively being performed by the colony, and if that damage is to your home…well the sooner they are removed, the better for you. 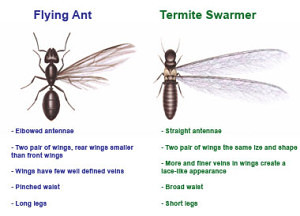 Termite swarmers, or alates as they are sometimes called, are the reproductive termites in the colony. They have wings and are often mistaken for other insects. This group of termites is released from the colony in early spring, anywhere from late February through May, depending on your climate and the weather for the year. They gather with the swarmers from other colonies who are local and mate during the spring swarms.

The process of mating happens at different times depending on the termite species. Usually, it is an extremely dramatic swarming and draws the attention of the homeowner in the area. Thousands of swarming termites can be in any given area. When mating is completed, the swarmers will lose their wings and begin new termite colonies which will be satellites to their original home colony.

Termite swarmers, just like soldiers, do not directly bring harm to your home. The danger with the swarmer is knowing they are establishing new nests in the area of the swarm. Current and even future termite activity locations can be seen with the presence of the swarming termite. Because of this, the homeowner seeing the termite swarmers should trigger an immediate call to your local and trusted termite and pest control company. At Canton Termite, we are licensed and experienced, a name you can trust with your home’s protection. Remember, pretreating and yearly inspections are vital to ensuring your home stays termite-free.

Termites are some of the most destructive pests in the world. If left unchecked, they can quickly cause major damage to a home or other structure. Because of this, it is important to prevent them from gaining a foothold on your property.

The prevention of termites should center around finding potential problem areas. Conducive conditions should be found and pretreatment applied if needed. Canton Termite and Pest Control can perform these inspections and treatments as a professional and experienced company. In this instance especially, it is best to leave termite treatment to the professionals.

With decades of experience in the Canton, Cartersville, and surrounding areas, Canton Termite and Pest Control have treated a wide variety of insects. Technicians at our company employ safe, targeted treatments that vary in an approach based on the individual needs of the homeowner. We are not a one size fits all mentality.

Termites are not an easy problem to tackle, so knowing who to call is vital. Trust us at Canton Termite and Pest Control to take care of your home and do the job with integrity, ability, and economic honesty. Give us a call today at 770-479-1598!