There are a variety of pests that can damage your lawn and garden during the spring and summer months. The scale of damage that these pests can cause varies greatly, from the incredible destructive Japanese beetle to the generally harmless June bug. While these two pests are fairly well known, one lesser known species, the stink bug, can cause a great deal of frustration for homeowners. 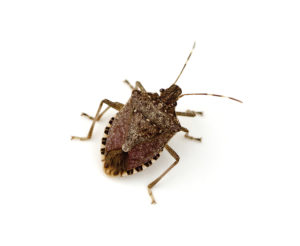 Stink bugs are a member of order Hemiptera, and therefore are considering to be “true” bugs. While there are a variety of species of stink bug that vary in size and color, they generally grow up to between 1/4 inch to 1/2 inch in length. As adults, stink bugs are usually a mix of brown colors. However, as nymphs, they are often yellow and red in coloration, which can make them a little easier to spot at this stage. Stink bugs are found across the United States, and their rapid spread has been a source of concern for both farmers and homeowners.

Female stink bugs reproduce fairly rapidly, laying up to several dozen eggs at a time. These eggs are placed on the undersides of plants, and new nymphs will hatch in less than a week. These nymphs will feed and grow for the rest of the summer until they are forced to find a warm, secluded place to survive the winter. Stink bugs usually become an issue for homeowners during this time, as the stink bugs will sometimes seek out hiding places inside homes. They tend to choose secluded spaces in the home to hide such is inside walls or in closets and garages. Due to their relatively small size, it is easy for them to exploit cracks and gaps in the exterior of the structure and gain access to the inside. Stink bugs inside homes do not feed or reproduce, but their presence in the home can still be a nuisance to homeowners if they are in an open area.

When spring returns, the stink bugs will emerge from their hiding places, often congregating on the exterior of the structure in mass. They will return to feeding, and can cause damage to a variety of flowers and agriculturally significant plants such as apples, corn, soybeans, and peaches. Using their piercing mouthpart, the stink bug will feed on the fruits, leaves, and stems of different plants. This can damage the fruit permanently, and will leave behind a characteristic scar on the plant.

Due to the fact that stink bugs can be a pest in two very different ways, treatment naturally varies depending on the situation and time of year. Since stink bugs are extremely difficult to remove from a home once the gain access, a focus of structural treatment is usually on the exterior of the home. It is also important to inspect the structure and identify any potential areas that the stink bugs could exploit to gain access to the home. It is best to have exterior treatment done for your home during the early spring, as this can ensure your home is protected before the stink bugs begin to appear.

Treating to protect plants from stink bugs can be a complicated process. Specific treatment products must be used to ensure that the plant is not harmed by the treatment, and this can often require professional assistance from a trained technician to be done correctly.

If you are dealing with stink bugs or any other pests around your home this summer, Canton Termite and Pest Control is your one call solution to your pest problems! Our technicians are trained professionals, and we begin every treatment process with a thorough inspection of the property. We use the information from this inspection to formulate a safe, targeted plan to eliminate your pest problems once and for all!

Here’s to YOU living pest free!