Ah fall, is my favorite time of the year. Bonfires and cooler days (and all Georgia residents say amen) are on the way. But hold on…so are the spiders! But before you get worried and run away in terror, let’s lay aside the fear and do some research. It’s time to learn about the creepy crawlies known as arachnids, aka spiders. And I hope at the end of our time together, you will feel just a little bit less afraid and a lot more impressed by the lowly spider. 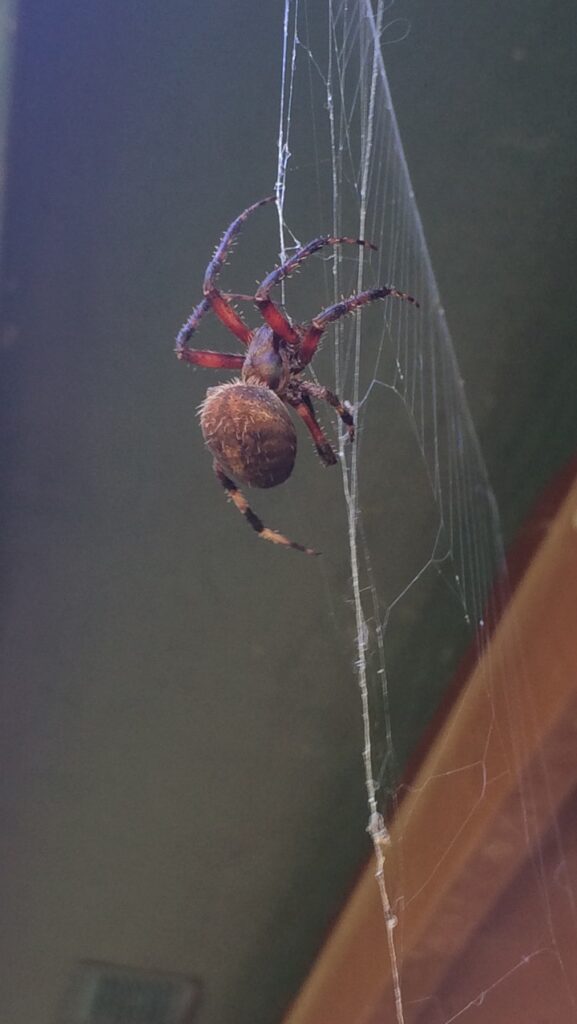 Arachnids are not actually insects at all, and their biology is actually quite distinct from any other creature. Insects have six legs while spiders have eight. Insects have three body parts and spiders only have two. Another difference is that insects have compound eyes while spiders have simple eyes but get this…six to eight of them! They also have spinnerets on their abdomens which create silk to spin webs. Now come on, that’s pretty cool.

Spiders are carnivorous and most rely on their webs to catch dinner, which can mean approximately ten percent of their body weight in insects is eaten every single day. That’s like a 100-pound gal eating 10 pounds of meat a day. That’s crazy! Remember I said most rely on their webs. There are exceptions, and the jumping spider is that guy. These aggressive little fellas eat other spiders and do so without the help of a web.

In total, it is estimated that spiders eat 400 to 800 million tons of insects per year.

That’s a lot of pest control. Thank you, spider friends!

Georgia sees many varieties of spiders. It is estimated that 38 varieties of spiders are found in Georgia. The common house spider, wolf spider, yellow garden spider, orb weavers, trapdoor spiders, and granddaddy longlegs are a few that we get calls about here at Canton Termite. Of course, the concern is always about dangerous spiders, most often the brown recluse. According to The University of Georgia, less than 100 brown recluse spiders have actually been verified and collected in our entire state. They are, as the name suggests, reclusive, and they are not web-making spiders. So even though a Canton homeowner may find a brown recluse, it is not nearly as likely as some may fear. And of course, all spiders can bite and everyone has different immune responses to bites, so caution is always the best approach when it comes to the spider world.

Why is fall spider season in Georgia? Well, because it is mating season. The egg sacs need to be created now in order to survive the winter season and continue the spider legacy come spring. Many homeowners get extremely nervous to see what seems like a spider invasion. The truth is that the spiders were probably there all along. For one thing, they were smaller and less noticeable in the spring and summer and are now full grown. Homeowners may also see outdoor spiders coming indoors. They are busily looking for mates and secluded spots like crawl spaces, wall voids, and maybe a quiet corner to leave their egg sacs. Many of the adults will die during the cold of the winter, but not all. Spiders are cold-blooded and can’t regulate their own temperatures. There are actually spider species who have their own brand of antifreeze! Some spiders have a glycol-type compound in their bloodstream that let the spider’s tissues remain unfrozen. Other spiders find a sheltered place like a pile of rocks or wood and then slow down their bodily systems in a state called diapause, similar to hibernation. But the spiders in diapause can become alert on warmer winter days and go in search of prey.

Now to the next question. What can you, the homeowner, do to control the spider population in and around your home? Notice I said control because elimination is not always an attainable goal. I learned some extremely cool spider facts from our very own Dwayne Epps. Dwayne is an Associate Certified Entomologist or ACE. His knowledge of insects and arachnids alike makes him an expert in the field. Following is what I learned from Dwayne: Insecticides are not as helpful when it comes to spiders because the spider has oil-resistant, waterproof pads on the bottom of their feet which allows them to stick to surfaces which insulates them from the pesticide particles. The likelihood of spiders crawling through pesticides isn’t high. Insects have a tendency to clean themselves by putting body parts in their mouths, which means ingesting the pesticides. On the other hand, spiders simply do not clean themselves very often. All this to say, spraying pesticides is not going to fully eliminate every spider around your home. But there are helpful hints to reducing the spider population in and around your home.

Spiders are well known for their climbing abilities, so they can find those gaps in your windows, doors, and siding. Seal the gaps! And of course, shut the doors and windows when not in use. Our technicians note that cutting away vegetation that is touching your home is an important preventative not only to spiders but other insects infiltrating your home. You can remove the webs around your doorways and windows but understand that the spiders may rebuild within hours. They are resilient creatures. The best preventative for spiders is to keep your home insect free because a house full of bugs looks like an all-you-can-eat buffet to the resourceful arachnids. And of course, the best way to keep your house bug free is…shameless plug, Canton Termite and Pest Control!