If you live in the Canton, Ga. area, you are almost certainly familiar with scorpions.

Scorpions are probably one of the most hated pests for your average person. They join snakes and spiders in the group of “Creatures Everyone Hates for Being What They Are.” While scorpions certainly are not warm and fuzzy creatures, they are not entirely without use. 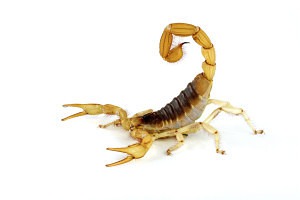 Like spiders, scorpions are predators and will kill and eat other insects, including harmful insects. They inhabit much of the world and there are around 1750 species.

While scorpions originally did not inhabit some places, such as Great Britain, human commerce has spread them to inhabit all parts of the world other than Antarctica.

Typically, when people think of scorpions, they imagine the giant scorpions of the desert that grow to over a foot in length. Fortunately for us, most scorpions are not more than an inch or so in size. All scorpions have a stinger, and while no scorpion in North America can harm a healthy adult, children and the elderly should seek medical attention if stung. Interestingly, scorpions do not typically sting prey unless necessary, preferring to simply use force to kill and eat prey rather than venom.

Often scorpions will move into basements of homes or in vents that open up to the outside, they often will hide inside of leaf piles, in garages, and other dark, shady areas. Scorpions prey on other insects, so if you have a preexisting insect problem in your home scorpions could become an issue as well.

Scorpions are also commonly found inside piles of rubbish and debris, so make sure to keep the property around your home clear of debris. While a scorpion sting is not necessarily harmful to your health, they do hurt and stepping on a scorpion never ends well.

If you find yourself stung by a scorpion, immediately clean the sting with soap and water, and then put a cold compress on it. If you are unable to identify the species of scorpion, or the sting appears to become worse, call poison control.

Naturally, you don’t want to have scorpions anywhere near your home, and here at Canton Termite and Pest Control, we don’t want that either. So let us help you. We service all of Cherokee County Georgia.

If you have a problem with flies, gnats, or any other pest…or simply a question…Call Canton Termite and Pest Control at 770-479-1598 and ask for me, Tim McWhirter, president. I’ll be happy to help you any way I can.

PS. Don’t forget to ask about our FREE 58 Point Pest Analysis of your home or office!

EXCELLENT Based on 139 reviews.

Kris Barnett
Updated 7/9/2021 It's not always fun living by a wooded area, snakes, bugs, wasps, that being said.....thank goodness for Canton Pest Control. Today Nic came out and sprayed a yellow jacket nest for us. YAY! Thank you again for such great service! (P.S. a thank you to Dwayne for showing us how to find the yellow jacket nests in the ground) Updated 6/18/2021 Today Nick came out for our quarterly service, super nice guy and was so patient to explain about the scorpions, snakes and other fun things in my yard! I could not be happier with Nick and Canton Termite & Pest Control. We have trouble with wasps, Dwayne came out and checked everything for us. He told us how to watch for yellow jacket nests and carpenter bees. He was professional, patient & informative. We could not be happier with Canton Termite & Pest Control.

Carole Forler
I highly recommend Canton Termite and Pest Control. Nic came out and treated a yellow jacket nest for us - He's much braver than I'll ever be! Nic is knowledgeable, funny, and really nice to work with. He deserves a raise after today!

Justin Hubbard
Couldn't be happier with my first treatment today. Shoutout to my man Dwayne who was not only very thorough in his treatment but didn't hesitate to explain what and why he was doing everything he was doing! Great job.

Anastacia Parham
We got fridge for free, didn’t know it was infested with roaches . Dwayne Epps is our man . Came out promptly and serviced ours needs with professionalism ,kindness . Answering any and all questions I had . Very fast , no smelly spray fumes ! A couple of treatments and the roaches were gone Thank you Canton termite

Tenille Coleman
William is the best! He did a fantastic job for us for 5 years, at our past home in Canton. He is very responsive and professional. We NEVER had an issue with bugs, and that made me one happy woman!!

Judith Hayes
Since moving to GA over four years ago we have had CT&PC 'minding our home'. All the staff members with whom we have interacted have been very professional and extremely nice people. We are disappointed to lose Jacob as our technician as he has been promoted (whatever took them so long ???) however, we are absolutely certain that whoever replaces him will surely 'fill his shoes'. Thank you CT&PC!

Steve Dillon
I recently had William from Canton Termite & pest control out to my home for help with a bat issue. William came out the same day and on time. He performed what was the most complete/ thorough free inspection that i ever had. William was very knowledgeable, professional and friendly. He showed me where the issue was in my home and how to resolve it. I will be calling these folks back for any other pest/ insect issues that i may have. I highly recommend them. Thanks William!

Caitlin Schoemmell
Nothing but good things to say about Canton Pest Control! They took care of my German Roach problem in just a few treatments and kept pests away with regular service. The only reason I'm not using them anymore is because I'm moving out of state. Highly recommend to anyone around!

Shells T
A BIG thank you to Nic! He is professional, courteous and extremely knowledgeable. I had a snake on my property and not only did he remove the snake for me, he taught me a lot about snakes as well, which put my mind more at ease. I always get a lesson when Nic comes around and I love that. It shows he loves his job and is passionate about wildlife. Outstanding service and answered all my questions. Highly recommend!