As fall approaches and the leaves begin to fall, you might spot a frightening but amazingly beautiful creation of nature, the nest of a bald-faced hornet. 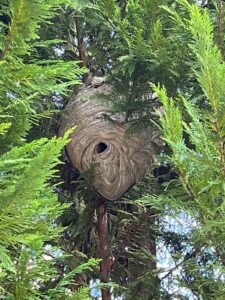 The nest is truly a work of art. During the spring, the queen collects wood material, cellulose, from nearby decaying wood. She chews the cellulose, combining the wood material with her saliva, and creates a type of pasty material. This pasty material becomes a sort of paper mache that she uses to construct the nest. Although the typical height of a hornet nest is 10-12 feet off the ground, Georgians have found them chest-high in a bush and more than 60 feet off the ground in a tall tree. The football-shaped, grayish nest can be larger than three feet tall in size! The nests have been spotted in tall trees, bushes, and on the eaves of buildings.

After completing the outside of the nest, the queen begins her interior design by creating 3 or 4 tiers of comb structures to function as brood cells. This is where she will deposit her eggs and feed the young larvae upon hatching. The nest will have a single opening located at the bottom of the nest for easy exit and entry.

Now that we have discussed the nest itself, let’s talk about the residents who call this remarkable place home.

The bald-faced hornet is a native of North America and a social insect. Most numerous in the Southeast, they are nonetheless found throughout the continent. Social means they live in large colonies. In fact, around 400 hornets can inhabit a single nest. That’s tight living quarters! This insect is not actually a true hornet at all, the only true hornet in Georgia is the European hornet.

Bald-faced hornets are actually a type of aerial yellowjacket. Their bodies are stout and hold the title for largest North American wasp, coming in at a whopping full one inch in length. The queen is the largest member of the colony. Their coloration is black with markings of white on the tip of their abdomens and their face. The face is primarily white, giving them the secondary name of white-faced hornet.

The behavior of the bald-faced hornet is what gives most Georgians a shiver of fear. The worker bees will not hesitate to defend the nest and are often seen ‘guarding’ the nest area. When approached, the hornets will attack in large numbers, and unlike honeybees who can only sting once, these protectors, can and will, sting multiple times. The smooth stinger of a bald-faced injects a painful, venomous fluid underneath the skin of its target. Protecting the colony is one of the jobs of the workers, who by the way are all female. Girl power! Everyone in the group has a purpose. The male drones fertilize the queen, and the queen lays hundreds of eggs. An interesting fact is that drones do not have the ability to sting.

As far as diet, the hornets eat a variety of foods depending on availability and necessity. In the spring, they tend to consume live sources of protein such as flies, caterpillars, aphids, spiders, and even other yellow jackets. Although the prey tends to be smaller in size than its predator, there is a documented record of a bald-faced hornet going after a rufous hummingbird! That’s a confident insect. As the eggs hatch and fewer larvae need to be fed, the hornets feed on nectar and pollen as the summer progresses. Since they do consume potentially harmful insects such as other yellow jackets and also aid in minor pollination with their nectar collection, the bald-faced hornet is actually considered beneficial, although those with dangerous allergic reactions may tend to disagree. Still, remember that these insects are only trying to protect their nest, so pay attention and steer clear. You won’t likely have any issues if they do not see you as a threat.

The life cycle of these hornet colonies is one year. When fall arrives, the recently hatched and fertilized new queens find a warm place to overwinter while the drones and old queen die off from the cold. Unlike honeybees, the bald-faced hornet does not reuse the nest the following year, and the beautiful accomplishment is left to the winter wind’s destruction.

Sometimes, a particularly brave collector will venture to preserve a nest; however, it is not always a safe hobby as the milder Georgia temperatures may allow larvae to survive inside and emerge when it is brought into a warm space, say your home. So, while the nest may be tempting to keep and definitely a thing of beauty, please don’t risk the danger of waking sleeping hornets!

We hope you have enjoyed learning about the bald-faced hornet. As always, if you have pest problems, termite issues, or wildlife concerns, Canton Termite and Pest Control is happy to help.