Every seventeen years, a mating ritual of amazing proportions takes place and changes the course of daily life for everyone, even presidents. I’m referring to Brood X and the cicada invasion of 2021. The tremendous number of these bugs who are active right now is truly mind-blowing and must be taken into account when considering certain activities, like say…flying a plane. 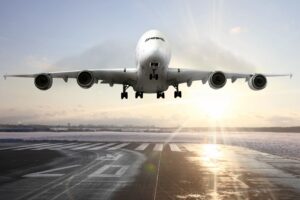 Weather radar is actually able to detect the movement of large groups of cicadas, and flight schedules are having to be delayed or rerouted. Unbelievable? It does sound a little far-fetched in the crazy bug story world, but it is true. Just last week, the little bugs caused President Biden’s White House press flight to be delayed for hours. Flying from Dulles and headed to Europe, the plan was for the journalists to arrive ahead of the President in preparation for his visit. Unfortunately, the best-laid plans do not always go as planned. This was certainly the case when the swarm of cicadas got themselves into the engines of the charter plane, forcing the group to delay take-off for hours! Mechanical issues are a mighty big problem and quite important to deal with before taking off, so getting rid of the winged critters was essential. Seven hours later, the invaders were finally ousted, and the plane was able to head to their destination. Other reporters have been seen valiantly trying to report the news while being swarmed by hordes of insects!

But reporters aren’t the only ones dealing with the invasion of cicadas. In Cincinnati, Ohio, a car crashed when a cicada flew in the window and smacked into the face of the surprised driver. So I suppose a good safety tip would be to keep your car windows up during this crazy mating season.

These insects are periodical cicadas and are members of the order Hemiptera. Their chosen diet is plant fluids, or xylem, which is found above and below ground. This particular brood, Brood X, is considered the biggest brood of 17-year cicadas on record. The centers of emergence seem to be around Pennsylvania, northern Virginia, Indiana, and eastern Tennessee. There are seven known species of periodical cicadas, and three are in the DC area. Remember, this is an unusual occurrence, and annual cicadas do appear yearly.

But this nuttiness is not normal, not at all! This is a lot of bugs! But no worries, it is only temporary. Entomologists expect the 17-year cicadas to be gone by the end of June, so that is good news. The annual cicadas will be active as normal during the summer, but the periodical cicada will complete their life cycle by then.

In the meantime, there are some things to consider. One is that other creatures see the emergence as “dinner buffet is on”. Copperheads are among the predators, so it is believed this dangerous snake will be more active this season. So beware. Another thought regards planting trees. The adults lay their eggs in the branches of young, small trees. Wait until fall for tree planting if possible. Be patient with your airline. Cicadas can cause dangerous problems. And don’t forget to shut your windows when driving.

So there you have it, bugs in the air, bugs on the ground, bugs in cars, and bugs on planes. If you live in their emergence areas, they truly are everywhere!  But we can all take a deep breath since this too shall pass.