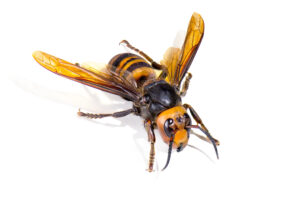 When I first saw the ominous title of this scary insect, I truly hoped it was a sci-fi thriller story of some sort. I certainly wish it could have been anything but reality…but it’s true. There is such a thing as a murder hornet, and it has been spotted in the United States. Ugh. Invasive species alert.

So what in the world is a murder hornet? Well, it is actually another name for the Asian Giant Hornet from the land of the rising sun, Japan. These insects are the world’s largest hornets, measuring a whopping two inches long! A typical nest is the size of a basketball and houses 100-200 hornets. That is a dangerous encounter to be sure. Not only do these dangerous hornets hand out a sting that supposedly feels like fire but also spits painful venom in its victim’s eyes. You heard me right…venom…in your eyes. The giant hornet has both neurotoxic and necrotic properties, which means the venom attacks the nervous system (neurotoxic) and destroys body tissue (necrotic). That’s a nasty sting. And venom squirted into the eye? Ouch. It is not common but spraying of the venom directly into the eye can happen and can cause significant pain and ocular damage. Even though this sounds crazy scary, don’t let the hype make you afraid to venture outdoors. There is always a risk, that is a part of life. Death can and does occur from these bees, but it is relatively rare. Still, the murder hornet does pose a huge risk for some creatures, and it isn’t us humans who are truly facing the greatest threat.

The greatest victims of the murder hornets are those least prepared to deal with them. The honeybee has no natural defense against this predator. Murder hornets are able to destroy an entire hive of honeybees in just hours. Queen murder hornets can grow to be a whopping two inches long and have mandibles that look like spiked shark fins. In a horrific attack, the honeybees are decapitated and their thoraxes removed to feed the young murder hornets. Honeybees are already under siege from a variety of enemies such as mites and climate change. We must protect the honeybee. And let us not forget, honeybees are invaluable to nature and to humans as pollinators. Simply put, without honeybees, we could easily face starvation.

Why are we talking about a Japanese insect when we live in the United States? Well…because this vicious hornet has made its way to our side of the ocean. The first murder hornets were found in Washington state in December of 2019. 2020 marked the extinction of a number of California honeybee hives due to the murder hornet. Amazingly, entomologists with the Department of Agriculture in Washington state attached radio trackers using dental floss to several hornets and tracked down the hive in order to eradicate the threat to our precious honeybees. Go, team!

But the fight is likely just beginning. This year, 2021, a male corpse from what is believed to be last year’s hornets, was found in Marysville, Washington. While this dead insect in itself is not a major cause for concern, experts will be on high alert to stamp out the problem before it gets out of hand. Since July is commonly the time we begin to see this species, entomologists are watching and preparing to continue the fight should it become necessary again this year.

Like so many non-indigenous plants and animals, there is a definite danger when species invade areas not meant for them to live in. It is vital that we do our part to keep our planet safe and thriving. First, if you see something odd in nature, report it. It was a concerned citizen who found and sent a photo of this year’s first murder hornet in the US to the Department of Agriculture. The experts cannot be everywhere, so we must be a help where we can. Everyone has a part to play in protecting our environment. Consult your local experts when in doubt. Second, when you travel, leave plants and animals where they belong. There is a balance to nature, and we can help maintain it by realizing that home for one is not home for all.

So there you have it, murder hornets in a nutshell. They are rare in the United States but deadly to our already dwindling honeybee population. Murder hornets have extremely painful stings and can lead to death if someone is highly allergic. Still, the chances of us Georgia folks being stung by a murder bee are low. But if the species prospers, the honeybees are in danger. And if the honeybees are in danger, then we are all in danger. Be alert and be knowledgeable but don’t be afraid.  Life is too short to live in fear.