It is no secret that termites are some of the most destructive pests in the world. Every year, billions of dollars is spent on treatment and damage repair as a direct result of termite infestation. If you are a homeowner here in Georgia, you are probably already aware of the threat that termites can pose to your home. 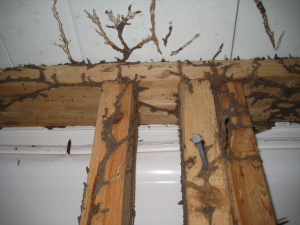 While you may be familiar with termites generally, did you know that there a variety of different termite species active in Georgia. Each of these species has a different lifestyle, feeding pattern, and capacity for destructive, and thus it is critical that homeowners are informed about the potential risks that each species can pose.

Though any species of termite can be destructive, a rare and particularly aggressive species of termites is beginning to spread here in Georgia. These pests are known as formosan termites, and while they are a rare pest, they can be a tremendous problem for homeowners.

So what’s so special about these formosan termites, and should homeowners be concerned about their activity?

Formosan termites are an invasive species that was originally introduced to the United States sometime after World War II. It is believed that they originally entered the country via a port, though the exact location is unknown.

Once they arrived in the United States, formosan termites began to spread around the country by infesting wooden railroad spikes, and this has allowed them to spread intermittently throughout the Southeast.

Formosan termites are differentiated in behavior from other termite species due to their ability to establish above ground shelters known as carton nests. These are typically made out of soil and a binding agent produced by the termite workers. These nests provide formosan termites with the moisture that other species must glean from the soil, and thus formosan termites can access parts of your home that are otherwise protected from termites.

Formosan termites will typically begin initial infestation during swarming season. During this time, the alates (winged reproductive members of the termite colony) will leave their home nests, mate, and find a location to establish a new colony. Unlike most termites, which attack a structure from below, formosan termites will sometimes establish carton nests in gutters, roof eaves, or other areas that are typically protected from termites. Thus they can sometimes bypass treatment barriers such as liquid treatment or bait systems.

While the formosan termite is certainly a scary pest, the fact is that the majority of Georgia homeowners need not concern themselves with these pests. While they are incredibly destructive, they are also very rare, with just a few pockets of Georgia having active formosan colonies. For this reason, if you are not in an area with an active formosan colony, odds are you will never encounter these pests. Though formosan termites are not a major concern for Georgia homeowners, termite swarming season is just around the corner, and there are a variety of native species that could threaten your home! For this reason, there has never been a better time to schedule an inspection of your home to ensure that you are protected from termite threats!

At Canton Termite and Pest Control, we have decades of experience dealing with termites! We are an industry leading pest control company founding and operating right here in Georgia, and we offer a wide range of treatment options that have been carefully designed to eradicate pest problems in your home safely, effectively, and completely!