If you’re like me, there is no other ant you fear as much as the tiny fire ant. Why? Well, if you don’t know already, they produce stings that are quite painful and typically come in groups of ants in ninja attack mode. Most Southerners are quite familiar with the intrepid little warriors and warily inspect our yards on a frequent basis for evidence of their presence. For those you haven’t had the pleasure of an introduction, let me give you the low-down on the fire ant. 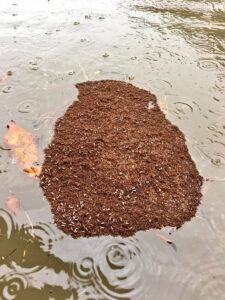 Fire ants can be found in most of the southeastern states and extend as far west as Texas. Georgia reported its first fire ant population in the 1950s. And let’s just say…once they moved in, they were quite prolific in spreading the family around the area. Even Maryland sees occasional sightings of the fire ant. The climate of our fair state of Georgia is ideal for this little pest and remains a common ant call we receive at our Canton office of Canton Termite and Pest Control.

If you’re wondering how to identify the fire ant amidst other varieties, there are many features to help with the quest. These ants are small at ⅛ to ¼ of an inch long, which is interesting since there is quite the variation in size amongst fire ants. Most other ants are fairly consistent in size. As far as coloring, fire ants exhibit reddish-brown coloring with antennas shaped like elbows. There are also black fire ants that are…well black in color. They have a stinger visible as well. Another way these aggressive ants can be recognized is by the mounds they build. The mounds of loosened soil are particularly evident after heavy rain. These mounds have no obvious opening like other ant mounds. Instead, the fire ants come and go through underground tunnels which can even lead to the water table if surface water is unobtainable. They are quite proficient at surviving. If you’ve ever disturbed one of these mounds, then you know they swarm out in large numbers to defend their home. And by defend, I mean sting!

By experience, I can tell you that a fire ant sting immediately produces burning or tingling at the site. Even the next day, the pain is not complete. The venom actually forms a white blister filled with white pus (I know gross) which is an identifying mark of the fire ant. The worker ants bite their victims with chewing parts on the mouth and then inject venom with their stingers. And get this, they do it repeatedly. It’s not a one-and-done situation. And let me remind you, there will likely be an entire colony on the warpath. So multiple stings per ant with multiple ants equals pain.

I can’t help but shiver whenever I think of fire ants because of an experience my son had as a young boy. We were at a playdate at a local park with several minivans full of excited kids, and the moms were sitting contentedly in our circle, unknowing of the underground menace waiting, watching the little one’s kick balls and throw frisbees. All of the sudden, I notice my son jumping up and down screaming in pain. I jumped up in full mom-mode ready to defend and protect but honestly had no idea what was wrong. The closer I got, I finally realized he was jumping in place on a fire ant hill while the worker ants did their very best to get this giant invader to move off their home. And were they angry! Life lessons learned and ointments applied, but it is a memory that stays with you for sure. Thankfully, my son did not have an allergic reaction, but any type of insect stings should be taken seriously, especially in a young child or a vulnerable population with known allergies.

Fall is the best time to take preventative action against future infestations of fire ants. The ant colonies are at their largest since they have had all spring and summer to grow and spread. Activity levels for the colony are at peak temperatures at 70-85 (I guess the fire ants and I might share the dislike of 90 plus temps). Fall weather signals harvest time for the ants. They begin foraging for food. This is the time for a licensed pest control company to actively treat your yard area with bait material. While ants are searching for food, they will carry the bait right back into the nest.

Another good reason to eradicate fire ants in the fall is that the location of the ants is easier to reach. They are not deep in the underground tunnels at this point. This means the queen and the brood are close to the surface as well and will be reached with the bait materials. This process done correctly should get rid of around 90 percent of the ants. It is important not to disturb the ant mound during the treatment process. One caution when spreading bait is that the ants are very sensitive to smells. If you use a spreader that has previously been used for fertilizer, the ants will not touch the bait. The same is true of gasoline or smoke from cigarettes on your hands. Gloves should most definitely be used for spreading or using any type of pesticide, including baits. This is another reason why a professional pest control company is best suited to deal with fire ant infestations.

These baits are not the end-all solution to ant invasions. Ant colonies from other areas are constantly searching for new homes. New queens are on the lookout for a home base. And remember that an ant population can be fully restored within 12-18 months after bait treatment. And if you live in a moist, low area prone to flooding, it could be even harder to get rid of the ants.

A follow-up treatment is often best to fully rid your yard of the ant population. After 7-10 days, the ant mounds can be checked by poking them with a stick (again a professional should perform this check for your safety). If there is still a sign of ant activity, a contact insecticide should be immediately used. The ants will quickly spread out and leave if you aren’t prepared to treat upon disturbance of the mound. The mound should be filled completely with the prepared insecticide in order to get to the entirety of the population. Dust or powders can also be used if the pest control company sees that is the best option for the area and situation. The powder is found by the workers and taken back to the rest of the colony to further eradicate the ants. This method is called the Texas Two-Step method as developed by a Texas A&M entomologist named Mike Merchant.

As you can tell, fire ants are not neighbors you want to keep. They can be dangerous for those with allergies and are definitely painful even if you’re not especially sensitive to their venom. If you have an ant problem or want to make sure to prevent future issues, give us a call at Canton Termite and Pest Control at 770-479-1598. We are here for you and want to help you stay ant-free!