Here at Canton Termite and Pest Control, we receive many calls from homeowners who have found a swarm of what they describe as giant wasps around their home.

Many of these calls have a common culprit, the cicada killer. Cicada killers are a species of large wasps that are common all across the Southeast. They are approximately two inches long and have a yellow/black body coloration. The males of the species are about two times smaller than the females. Their size and brownish colored wings often cause them to be misidentified as European hornets. For this reason, many people are afraid to approach them, especially when they are in large numbers. 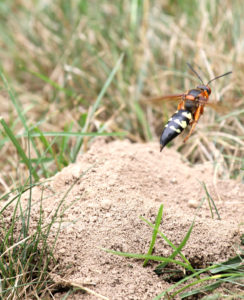 As their name suggests, cicada killers primarily feed on cicadas. Cicada killers will capture prey using venom to paralyze the captured insect. Once this is accomplished, the cicada killer will take the prey back to a burrow and inject an egg into the captured prey. The egg will hatch and a larvae will feed the prey while it grows.

Unlike many other species of wasps, cicada killers are not social insects. Rather than living in large colonies, the cicada killer will build a small, underground burrow to live inside of. The female cicada killer will lay eggs inside of this burrow during in the winter. These eggs will hatch, and the larvae will consume the prey that was left as a food source for several weeks. After some time has passed, the larvae will mature into a pupal stage. They will then emerge in early summer as adults. Once they have emerged into the world, the female cicada killers will consume prey to store energy. They will then mate and begin to create a burrow to house her eggs.

These burrows are usually found around lawns, concrete slabs, sandy areas, and other relatively clear outdoor spaces. While under construction, the burrows can be identified by the “U” shape the excavated soil at the entrance forms. Though the exterior is simple, the inside of the burrow is very complex. The female cicada killer will divide the burrow into a series of cells for each future egg. Once these cells are complete, the cicada killer will hunt and capture prey to leave inside of the cells for the future larvae to consume. The cells will be sealed off once they are filled, making it impossible for the prey to escape.

Cicada killers pose no threat to humans, but their large size and similarity to European hornets can sometimes cause panic. Cicada killers can often be found in large numbers in a single area, and this can prove to be an issue when that area is near to homes and other buildings. Large swarms of cicada killers can appear to be dangerous, and will scare people away from businesses. They can also make it difficult to enjoy time outside of your home.

Another problem is presented by the nests built by the female cicada killers. These nests are often large, and on well manicured lawns they are obvious and unsightly. The females will often pile the dirt that they excavate around the nest, and this can smother grass underneath. For these reasons, extermination is sometimes necessary for dealing with cicada killers.

At Canton Termite and Pest Control, we understand the frustration of cicada killers. You do not want your home or business to be surrounded by cicada killers. We pride ourselves on being industry leaders in safe, efficient, and cost effective methods for pest control. We will deal with any problem around your home or business quickly and at a price that does not break your budget.

So if you have problems with cicada killers, or simply a question, call us today at 770-479-1598! Ask for me, Tim McWhirter, and I will be happy to help you at any time!

Here’s to YOU living pest free!